Facebook is among the giant social platforms that have over the past months taken action to suppress and remove content uploaded by those believing in the existence of an international child trafficking conspiracy that involves some prominent political and other figures; this is known as QAnon, and is taken by these corporations not as an exploration of a conspiracy – but a dangerous conspiracy theory in itself.

The road from censoring or obscuring this type of content, to targeting that posted on Facebook by Christian organizations promoting their religion’s practices unrelated to QAnon should be very long, if not impossible – but not if “a glitch” in the censorship system occurs linking the two, and labeling one Christian group in particular associated with QAnon.

However, the founder of the group Let Us Worship, Sean Feucht, denied ever speaking about QAnon, either publicly and privately. The group is known for organizing worship rallies in those areas of the US affected by restrictive coronavirus measures and protests and rioting, said the Federalist. 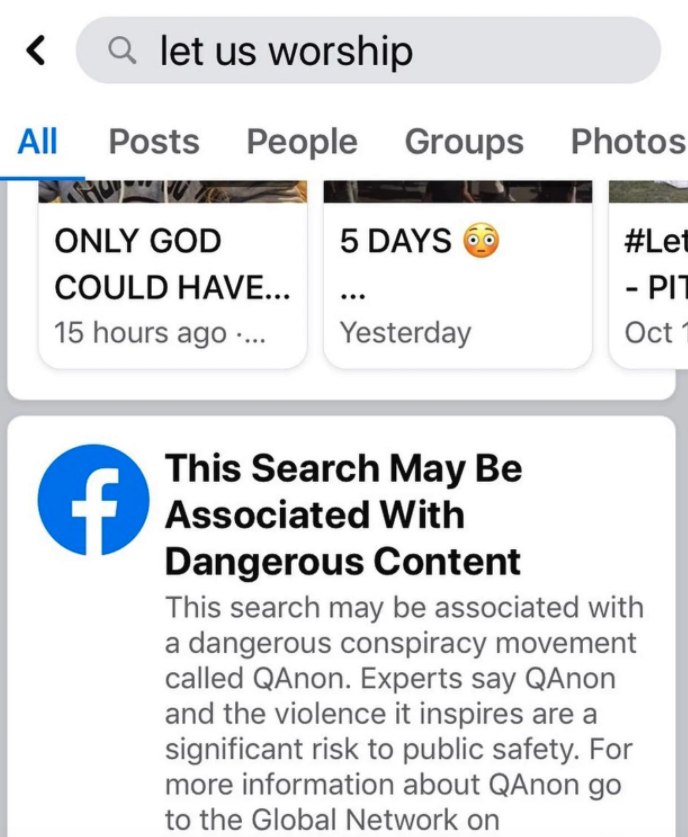 Now Feucht has his doubts about Facebook’s explanation that placing the QAnon warning label on searches about Let Us Warship was really a technical mistake. In fact, he believes there is an agenda to deliberately go after the church by suppressing it on the world’s largest and most influential social media platform – especially after The Daily Beast recently ran what’s described as a “hit piece” against it.

After Let Us Worship complained, Facebook removed the label, but never explained why and how it decided to place it there in the first place, or issued any apology, Feucht said. Most importantly, there’s been no word from the giant about what they intend to do to stop similar potentially dangerous mistakes from repeating going forward.

The way Facebook decided to deal with QAnon content – saying it was among “anarchist groups that support violent acts amidst protests” – has not been outright banning, but limiting of associated Facebook Groups, Pages, and Instagram accounts. Just last week, this policy was updated to redirect users searching for information about QAnon on Facebook and Instagram to that provided by the Global Network on Extremism and Technology – “an independent but industry-funded initiative for better understanding, and counteracting, terrorist use of technology.”

The post Facebook backtracks after Christian group was flagged as “dangerous conspiracy movement” appeared first on Reclaim The Net.