YouTube always appears to find a reason to censor interviews with President Donald Trump and today is no different.

On the conservative political commentator‘s show, Trump reiterated his claims that the 2020 presidential election was rigged.
Dan Bongino uploaded a recent episode of his radio show, The Dan Bongino Show, on YouTube, where he interviewed former President Donald Trump.

In the interview, Bongino and Trump discussed the latter‘s plans to vie for the presidency in 2024. “Would you consider, if you were to run again, getting out really early, say after the midterm elections?“ Bongino asked. Trump replied:

“If I do that…I think probably the most appropriate time would be right after the ‘22 election.“

Trump also reiterated his claims about widespread fraud in the 2020 presidential election, claims that have been censored and removed on all Big Tech platforms, including YouTube.

The interview was removed soon after it was uploaded. 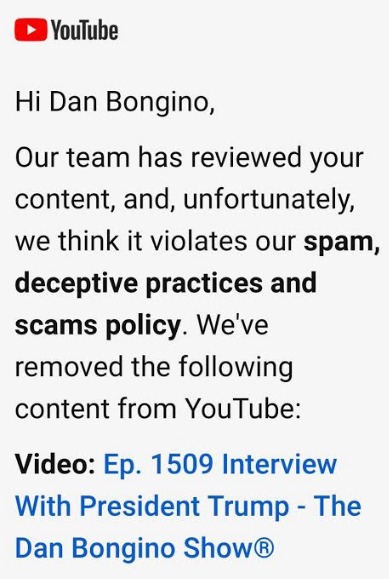 But the censorship of the interview was a chance to shine for upcoming video platform Rumble where viewers headed to hear the former President speak.

Bongino‘s interview with Trump soon racked up over half a million viewers on the fast-growing YouTube alternative.

In recent months, YouTube has censored and banned conservative personalities, including Rudy Giuliani and Sebastian Gorka. Trump himself was banned in January.

“But you wouldn‘t have heard any of it on YouTube, which is apparently attempting to justify censoring it under the guise of their ‘deceptive practices and scams‘ policy, as opposed to their ‘we don‘t like Trump‘ policy,“ Bongino wrote.

The post Hundreds of thousands flock to Rumble after Big Tech censors Trump interview appeared first on Reclaim The Net.