Heard is being sued by her ex Johnny Depp for defamation and her routinely dubious claims about his behavior have been subject to cynicism and ridicule.

However, seemingly keen to stop the spread of embarrassing viral videos which portrayed Heard in a bad light, Rolling Stone contacted the platform complaining that the videos ‘glorified violence or suffering’.

One of the videos in question, which was later deleted by TikTok, featured two cats playing the roles of Heard and Depp.

“In the video, Heard’s testimony is reenacted by a cat in a blond wig, with the same cat in a black wig and a Pirates of The Caribbean bandana playing Johnny Depp,” reports Reclaim the Net. “When the video starts, the cat playing Heard is lightly slapped using a finger.”

“The videos mock the alleged inconsistencies in Heard’s testimony, particularly the part where she says that she “turned to look at [Depp]” after he hit her. The original video’s caption read: “Don’t you have to be looking at someone in the face to be able to slap them across it?”

The video, originally posted by a user going by the handle @heyitsgingerandpepper, was removed after clocking up more than 14 million views.

TikTok removed several videos it was alerted to by Rolling Stone journalists, claiming they violated the platforms policies against bullying and harassment, which does not allow “content that disparages victims of violent tragedies.” 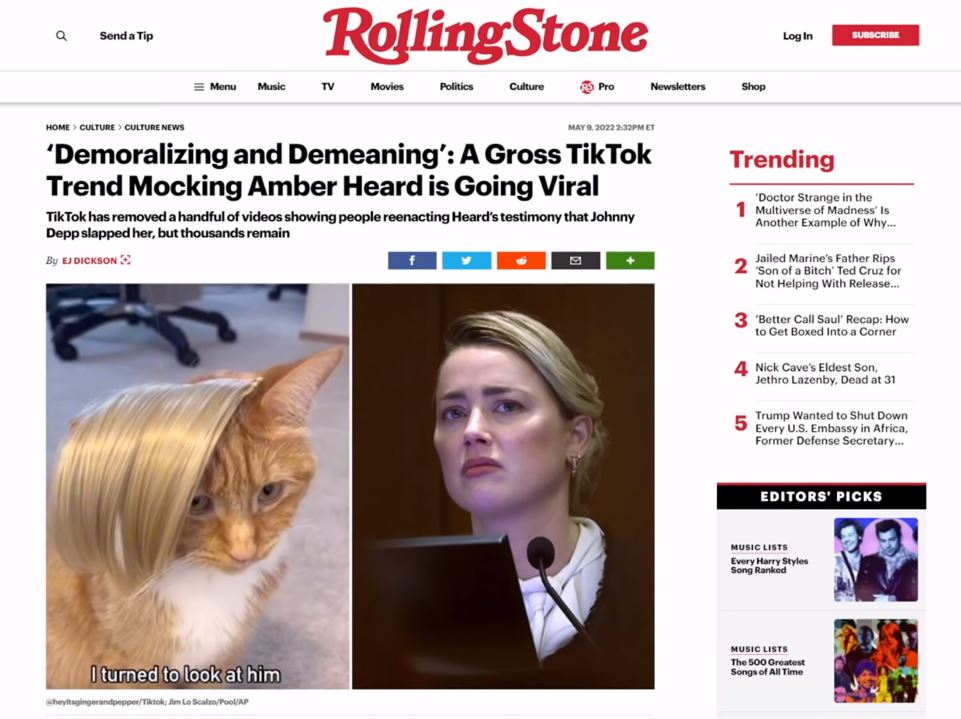 Yeah, because cat memes are so “gross”.

As if mocking what happened to Heard, or more likely what didn’t happen, represents mocking a ‘violent tragedy’. That’s manifestly absurd.

This is yet another example of how legacy media dogpiling and social media censorship, justified in the name of cracking down on “hate” and “misinformation,” is weaponized to help craft a narrative.

Brand new merch now available! Get it at https://www.pjwshop.com/

In the age of mass Silicon Valley censorship It is crucial that we stay in touch.

I need you to sign up for my free newsletter here.

Support my sponsor – Turbo Force – a supercharged boost of clean energy without the comedown.