Trapt lead singer Chris Taylor Brown says that the band has been banned on Facebook.

The message that was shared on Twitter and Facebook featured the image of a Proud Boy holding the Statue of Liberty, and the words, “Don’t worry girl. We got you” – while Brown accompanied this by writing, “We do! POYB.” 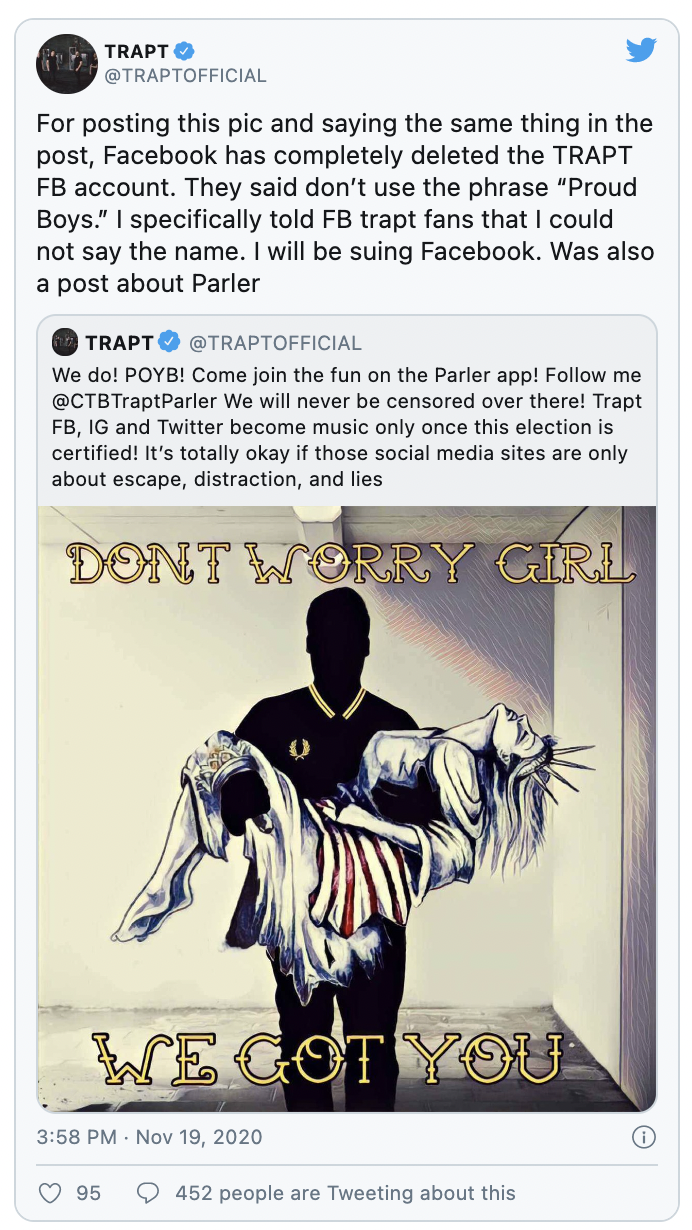 It seems that his use of “POYB” (an acronym often used by the Proud Boys) was the reason Facebook deleted the page.

Guided by the opinion of the likes of the Southern Poverty Law Center, Facebook considers them a hate group and has been trying to prevent Proud Boy members from having accounts on the platform since 2018.

It’s unclear if Brown is indeed a member of the organization or simply a supporter, but what’s known is that he and members of his band support President Trump, and have been expressing their doubts about the fairness of the recent election.

Brown now says he will sue Facebook for deleting Trapt’s page, and told Newsweek in an email that the lawsuit would apparently be based on the one to be filed by conservative commentator Candace Owens who is suing Facebook and USA Today for using fact checkers to flag her content on these platforms.

That would indicate that Brown believes Facebook took action against his band on the same basis, but there’s nothing yet that suggests if Facebook in any way explained its decision concerning this specific case – other saying the company bans the Proud Boys and its members.

Trapt’s Twitter account in the past as well posted messages of support for the group, and engaged in feuds with other bands and their fans, who couldn’t accept their political stance in favor of Trump.

The post Trapt kicked off of Facebook after Proud Boys meme appeared first on Reclaim The Net.