The author has become well-known as a critic of coronavirus quarantines and mandates.

“The account you referenced has been permanently suspended for repeated violations of our COVID-19 misinformation rules,” the Twitter representative stated.

The journalist has repeatedly expressed his views about COVID-19, in particular the efficacy of the vaccines, but a recent tweet apparently triggered Twitter’s decision to ban him.

“Think of it — at best — as a therapeutic with a limited window of efficacy and terrible side effect profile that must be dosed IN ADVANCE OF ILLNESS.” 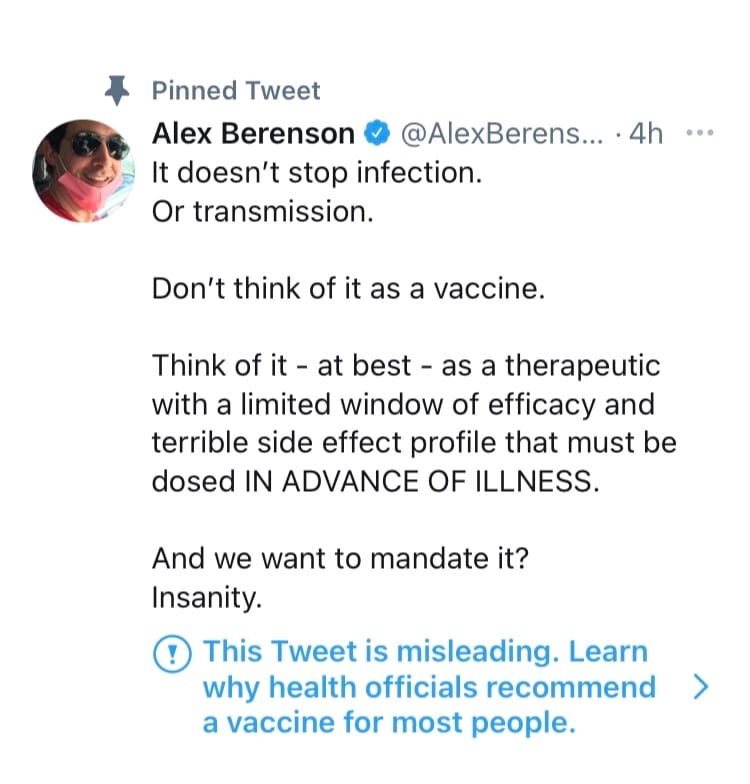 After being suspended from Twitter, Benson made an entry on Substack, a newsletter service, which featured the tweet that appears to have caused the issue.

In the post headlined “Goodbye Twitter,” Berenson wrote: “I am officially suspended. This was the tweet that did it. Entirely accurate. I can’t wait to hear what a jury will make of this. Meantime, guess you’ll be getting more Substacks.”

“We have reached a dangerous moment. Social media companies that have audiences which dwarf any other are now actively censoring reporters at the behest of governments,” Berenson said in a statement.

“I will continue to fight to get out the truth and am considering all legal options.”