While the online world has lately been busy considering and grappling with other forms of restrictions and ill-thought-out legislation, our “old pal,” the Digital Millennium Copyright Act (DMCA), continues to be used and abused like it has been since it was passed in 1998.

Reports say that Xfinity, an ISP and a Comcast conglomerate’s subsidiary in the US, is suspending internet access for users accused of downloading allegedly copyright infringing torrent files – seemingly just to be on the safe side of copyright holders’ wrath, and because, under the DMCA – it can.

In this day and age, with people’s lives and livelihoods depending on it, cutting off someone’s internet access is pretty much akin to leaving them without electricity and water supply – for example, because they consume either irresponsibly, or are simply accused of that. That would be unconscionable – but apparently, people’s internet connection can still be gone at the drop of a hat.

At the core of the problem are not technicalities but the fact that like any 25+ year-old legislation meant to deal with the web era, the DMCA has aged like milk. And massive corporations are certainly not the ones who will take any action to challenge it. As the Comcast example shows, the only action they are taking is to enforce it.

TorrentFreak reports that just this week, a Comcast subscriber received a notice saying, “action is required” – a document under the telecom giant’s “DMCA repeat infringer policy.” 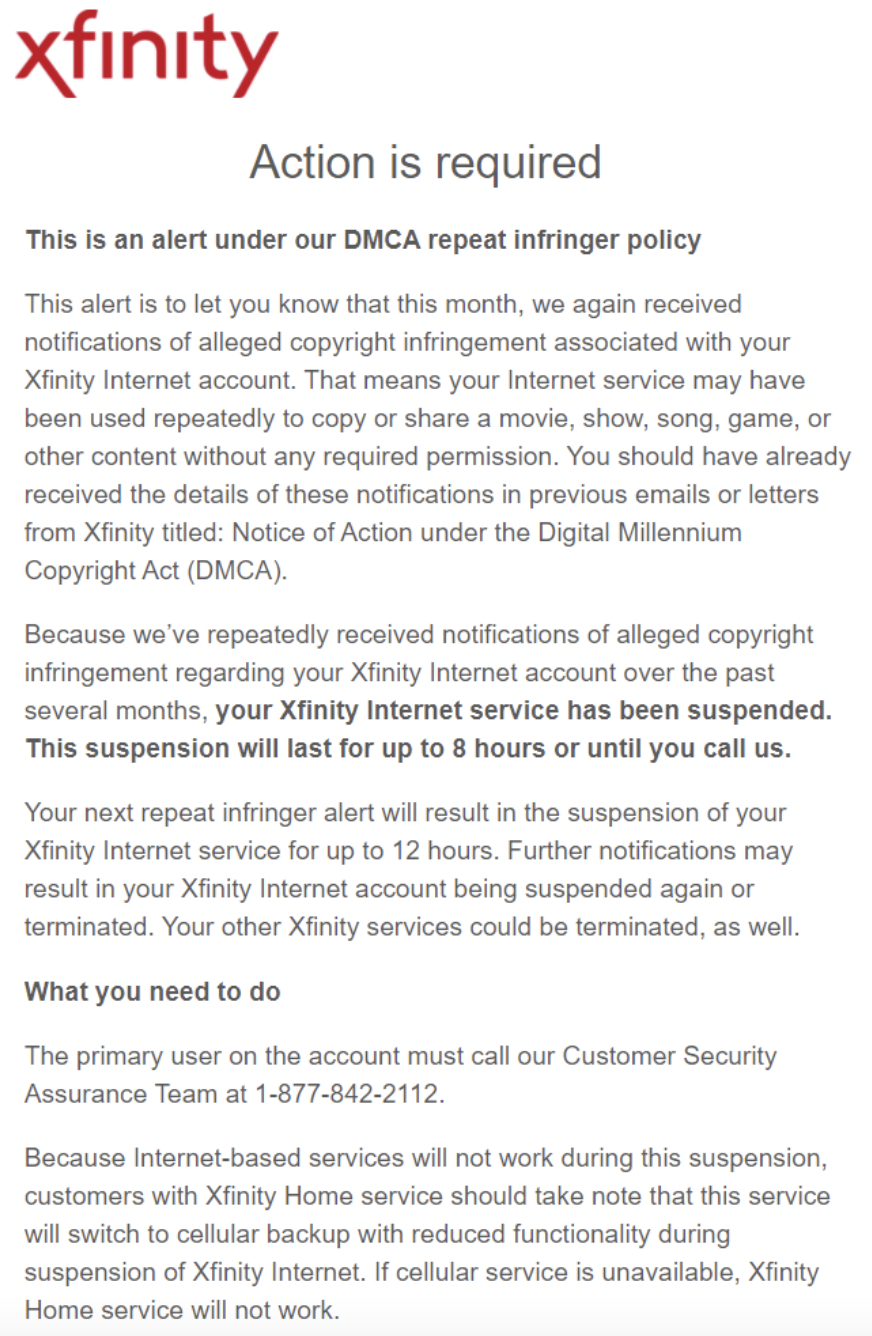 The site notes that ISPs must implement their policies in this regard – without any need to formally define them in writing – “meaning that it is acceptable for an ISP to simply inform subscribers that a policy of terminating offenders in ‘appropriate circumstances’ exists. Specifics do not have to be made public.”

So in addition to all its other “problematic” features – the DMCA seems to be the “granddaddy” of making online rules vague and confusing. These days, so many tech giants rely on that principle to effectively mistreat their users and trample on a variety of their rights.

“Of course, this creates uncertainty among users. Even when approached directly, ISPs refuse to detail exactly what their processes are, meaning that users simply have to find out as they go along,” TorrentFreak said of the “repeat offender” policy.

The only question seemingly left to answer here is how deep US ISPs will go in depriving their users of a basic utility like an internet connection. Will it continue to be a “Pavlov’s dog” type of conditioning that lasts several hours – or will things deteriorate?