The video featured a talk Woods gave at the Mises Institute’s November 7 Symposium with Ron Paul. Woods said that it had racked up almost 1.5 million views before it was purged by YouTube. 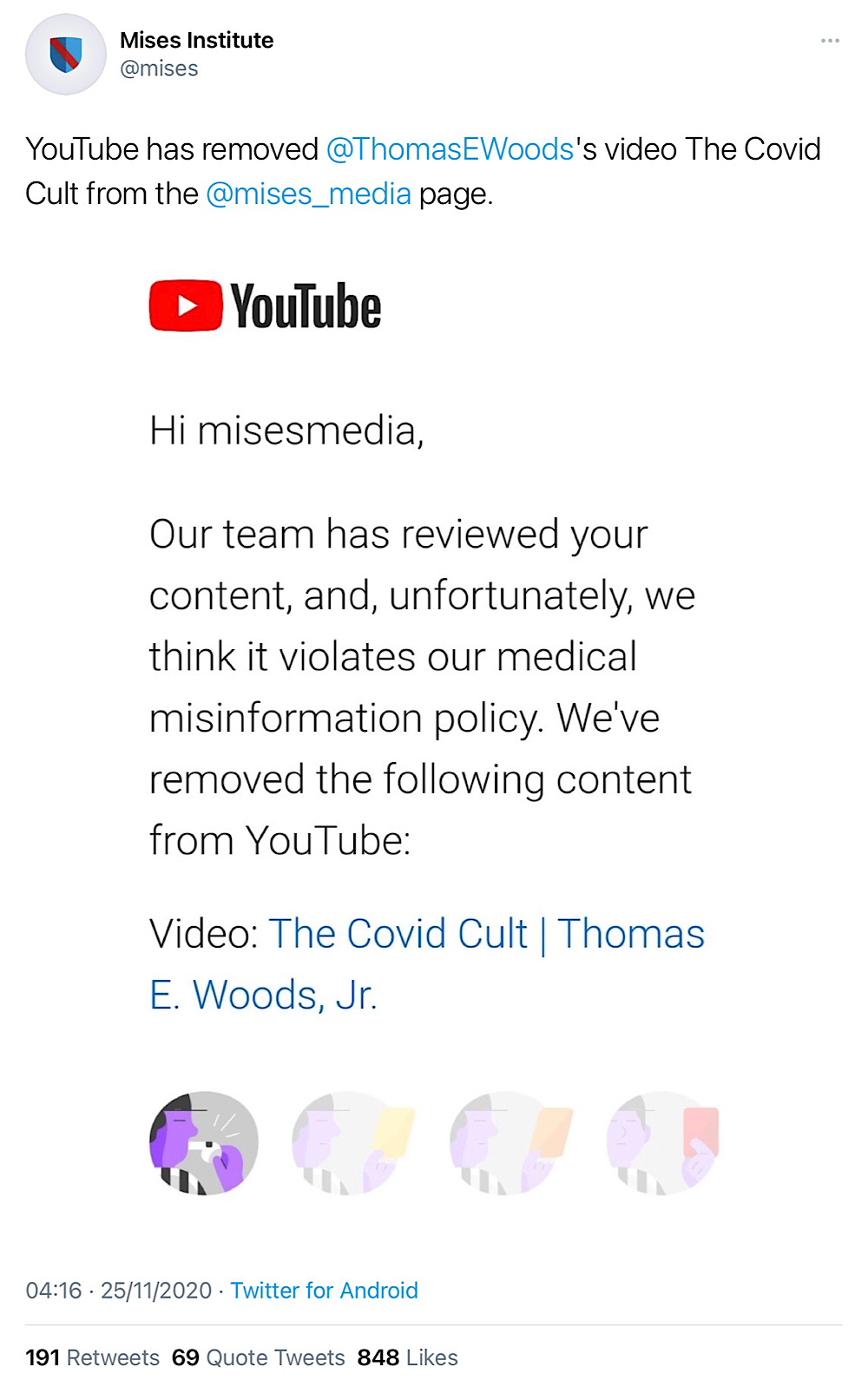 In the video, Woods argued that lockdowns and masks are not effective and provided data on non-COVID deaths caused by lockdowns. He also proposed that “we should protect the vulnerable and let everybody else live” and claimed that a majority of infectious disease epidemiologists favor this strategy over lockdowns.

While YouTube only cited violations of its medical misinformation rules as the justification for taking the video down, presumably Woods’ statements questioning the official narrative on lockdowns were deemed to violate its far-reaching rule that prohibits any videos that “might” encourage people to ignore stay at home advice.

Woods wrote that Facebook also took action against his video by fact-checking it – a move that restricts post viewership by 95% on average.

The censorship of Woods’ video follows Facebook and YouTube ramping up their restrictions on what users are allowed to post about the coronavirus. Any posts that question the official narrative on lockdowns or masks are often being struck down or heavily restricted under these rules.

President of the Mises Institute Jeff Deist slammed YouTube for removing the video.

“YouTube had no earthly business removing it,” Deist wrote.” This kind of discourse seems to me the best and highest use for YouTube, its most important function.”

Woods is the latest of many to have his statements about the coronavirus censored by YouTube.

Yesterday, One America News Network (OANN) was censored and demonetized after YouTube branded one of its videos “COVID-19 misinformation.”

Last month, YouTube censored a White Coat Summit event organized by America’s Frontline Doctors – a group of doctors who are working to address what they describe as “a massive disinformation campaign” about the coronavirus.

An episode of former Congressman Ron Paul’s political talk show The Liberty Report was also censored by YouTube in September after Paul discussed reports that challenge the effectiveness of lockdowns and wearing masks.

And Scott Atlas, a White House coronavirus advisor, had one of his YouTube videos censored in September for contradicting the World Health Organization (WHO).